Jadon’s new favorite word.  As in:

Dad:  Jadon, what do you want for dinner?

Dad:  Jadon, what do you want to watch on TV?

But do you know what I learned?  I learned that if you go ahead and do the laundry anyway, it gets really hard to hear the wailing over the dryer.  And I also learned that I’m going to need to improve my Leapster repair skills, because this cannot happen again.

Because my kid walked up to a goat and said, “Baa.”  This is troublesome and more than a little disturbing, especially coming from the sort-of-used-to-be country kid that once walked into church and announced, “I got sheep shit on my shoes!”  (Although, I have to say that in retrospect–and in the lovely alliteration–I could have seen signs of my word-nerdiness going WAY back.)

And here’s the sheep/goat thing that now probably has a personality crisis because of my kid labeling it with the wrong sound: 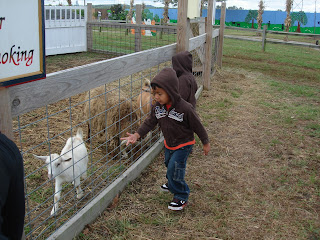 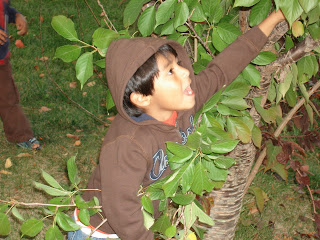 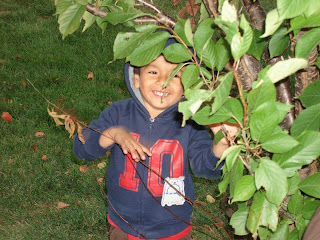 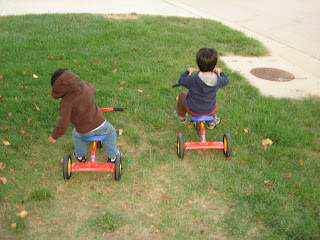 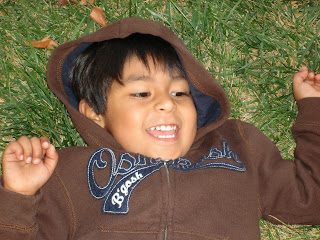 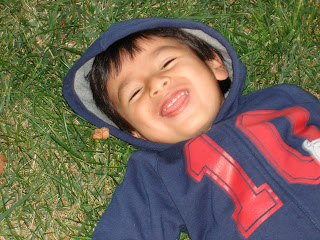 This Halloween was the best one we’ve had with the little boys.  Not that the first year–when they were both scared of their dalmation costumes–wasn’t a blast.  And not that the next year–when they both got to the farthest point from home on our walk and THEN refused to take another step–wasn’t also a fantastic time.  They were all great.

All I’m saying is that this year, the weather cooperated.  The boys cooperated.  The costumes weren’t a) too itchy,  b) too hot,  c) too scary, or d) all of the above.  We had a very happy monkey: 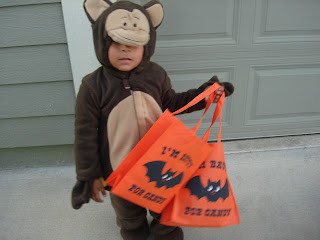 And we had a not-entirely-unhappy dragon.  He was definitely happier once he realized that the ridiculous dragon costume would get him more candy: 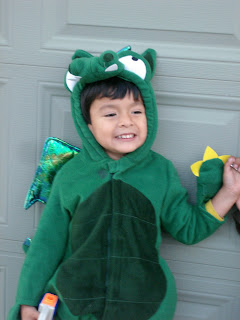 Once we were able to wrestle Jordan into the dragon costume for the fifty-bazillionth time, we ran out the door (before he could take it off again) and headed to the neighbors’ for loot…you know, the kind of loot that would have all the neighborhood kiddies wallowing in a sugar-induced stupor by bedtime.

The boys actually walked the entire time, which was a vast improvement over years past.  Although, halfway through our candy quest, their pace slowed considerably, and they showed more interest in plundering their bags than in begging for more candy.  Whateva’, little guys, Mommy and Daddy are on the lookout for Reese’s and Snickers, so get on up there and ring another doorbell.

We lasted about an hour before exhaustion set in (mostly on the part of the parents, but I think the kids were tired, too).  This was ok, because earlier in the evening we were informed by Marissa that we were no longer cool, and she ditched us.  Yup.  Ditched.  Us.  (I know, right?!  Can you even believe it?)  Evidently, her friend was a WAY cooler trick-or-treat buddy, so the Mad Hatter headed off to greener pastures…or more sugary streets.  But I did get a pic before she left: 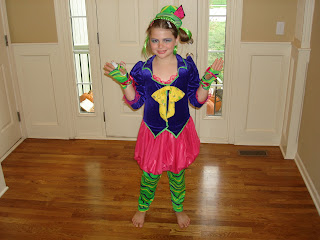 We allowed a bit of candy eating before bed, but it didn’t take long to usher all our little goblins off to sleep after they came in from their candy gathering.  After all, Mommy and Daddy still had to plunder the candy bags for the good stuff.