Because we like to be subtle and all, and we would never ever cause a scene.  Nevermind the fact that I’m usually dragging 50 gazillion unwilling children in tow, and each of those children usually has an armload of self-defined “treasures” that could not possibly be left behind in the car, and on the way in the door we have probably dropped 6 mittens and thrown a shoe or two and tripped in front of a moving vehicle in the crosswalk.  By the time we finally make it in the door to whatever store we are attempting to enter, Mommy has moved boxed wine to the top of the grocery list.  Last night was no different.
We ventured to our local Target store because Micaela  needed white socks for her out-of-town trampoline competition.  And just so you know, these cannot be just any white socks.  These socks can have absolutely no color or markings on them of any sort—no toe seams, no branding, nada—and that’s pretty darn difficult to find.  But Target has ‘em, so off we went to procure said socks while big sister was at practice.
Our visit started off just fine.  We began by listing every single item in the store as possible loot that Santa might bring.  As in “I gonna ask Santa for dat.  And dat.  And dat too.”  Everything in the store.  From toys to hot dog buns to boots.  We’re asking Santa for a lot of goods, folks.
And we were having a grand time wasting time until practice was over.  We found the white socks.  We raided the dollar aisle, where everyone found more treasure to tote around.
THEN we made it to the Christmas aisle, or as I like to call it now, the Aisle of Doom.  We were all deciding which ornaments we would pick when we came back with Daddy for our yearly Everybody-Gets-a-New-Ornament excursion when all holy hell broke loose.  One minute we were looking at Cars ornaments, and the next minute, I heard, “Mama, I sink I got a boo-boo.”  This was followed by the obligatory moment of shocked silence, which was immediately followed by the 4-year-old WAIL OF DEATH when the blood began to spurt from Jadon’s finger.  And there was blood, enough to begin running down his hand and dripping onto his jeans, and let me just mention that this kid does not like blood.  Not one little bit.
In between wails and screeches, I could barely make out some recognizable words.  Really, they were more like wail-sob-words, the kind that sort of get stuck and sound all hiccuppy in the middle, but it was something like, “I neeeeeed a baaaannnnddd-aid!”  He said it over and over and over again.  I offered to wipe it on my jacket, to kiss it (yeah, I would have kissed it to shut him up), but all he wanted was a baaaaaaaannnd-aid!  And he wanted it right then and there before all the blood drained right out of his hand and he fell over and died right there in Target…or at least that’s how dramatic it sounded.
Evidently he had grabbed something sharp.  (My brilliant doctoring/sleuthing skills at work.)  So quickly, I tried to explain to Jordan why he had to put Lightning McQueen back on the shelf so that we could attempt to save his brother’s finger, but Jordan would have none of that.  He wanted Lightning McQueen for the tree.  Stomp!  Stomp!  Pouty-pout-pout.  So I manhandled Lightning from his sticky little grip, and we began our cross-Target trek.
If you are at all familiar with the layout of Target, you will know that the holiday aisle is about the farthest aisle from the band-aid aisle in the entire store.  So our little triage train of stompy-4-year-old, bleeding patient in the cart with his stump held high for all to see, Marissa holding a glittery peace sign ornament the size of her head, and Mommy trying desperately to steer the beastly cart-train-thing with seats on the end went flying through the store ever so subtly toward the first-aid aisle.  I ripped open the first box of band-aids I could find, just daring anyone to challenge me to purchase it first.  Oh, c’mon Target people, just try to tell me to take my bloody kid through the checkout before I dress the wound.
I really have no idea what we purchased at Target last night, except I’m pretty sure that we got the white socks, and I think we paid for the band-aids.  I am very aware that Mommy did not get her box of wine, which is why I had to settle for chocolate Frosted Flakes once everyone was finally tucked into bed last night.  As for subtle, um yeah, we don’t do that in our family.  When we go somewhere, people know we’ve been there.
Evidently this is a more complicated process than I originally thought.  I have had numerous suggestions and calls and tips and hints and such as to what to do with the damned turkey (mostly from my mother-in-law).  For any of y’all who are unaware, there will be turkey at our house this year, for the first time in the history of creation, so it’s going to be special.  And by special, I mean, the kids are going to be running around like striped-assed apes, the dog will probably be humping someone, and we’ll be lucky if no one gets salmonella.
Things my mother-in-law suggests I do with/for/about/to/regarding THE TURKEY.  You know, because I’m a moron and probably wouldn’t recognize a turkey if it walked right up and bit me in the ass.  (Disclaimer in case my mother-in-law has miraculously discovered this blog…that was harmless sarcasm.)  Anyway, back to the list of things I MUST DO:
So here’s what I’m PLANNING to do about the whole turkey situation:
Happy Thanksgiving!

Happy 10th Birthday, Marissa Grace.  You are amazing and smart and so very funny.  You make us proud every single day, and your smile can light up an entire room.  I can’t believe it’s already been 10 years since we used to wrap you up in your favorite blanket like a little burrito.  Now, that favorite blanket is still around, but it’s so well-loved that it’s in tatters, and MaMaw had to sew it inside another blanket just to keep it in tact.

Marissa, you look so grown up with your glasses, and now you almost always wear jeans and t-shirts, but I still remember all the ruffles and bows you had as a little girl.  You may be growing up, but you’ll always be our little girl.  We love you! 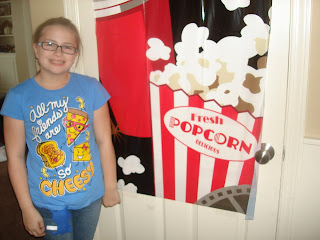 ‘Someone’ attempted to make microwave popcorn for the slumber party this weekend.  That ‘someone’ shall remain nameless, but let’s just say that this person clearly has never successfully made microwave popcorn before…EVER.  Because, this was the result: 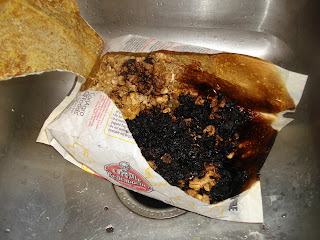 And then we had about eight 10-year-old girls where were nearly asphyxiated on burnt popcorn fumes before the movie party even started.  Don’t worry, parents, we’ll keep your kiddos safe.  We’ll just knock ’em out with noxious fumes, and they’ll sleep like angels until tomorrow when we can turn them right back over to you.  Bam!  That’s how you throw a slumber party!
Dear Daddy,
Um, yeah.  Where do I even begin?  First of all, we are not taking THIS to school: 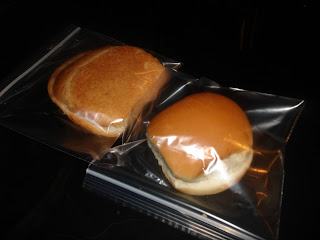 Let me explain.  You may not have heard the term.
Ghetto Sandwich:  A sandwich constructed from leftover bits and pieces of food scraped up from around the house; a half-hearted attempt to look like its mainstream cousin, ‘the sandwich.’
We skipped downstairs to find ourselves confronted with this monstrosity facing us on the stove this morning.  Sitting in the place where our sandwiches normally sit were these things, one thing made of two squished-together heels and the other made of a hamburger bun.  Is that seriously a flippin’ hamburger bun, dude?
Yeah, this isn’t going to work.  You see, normally, the lunch fairy leaves us some nice, respectable sandwiches to place inside our lunch boxes each morning, but this morning, I’m not sure what we’d done to make her so mad at us.  But evidently, she scraped her way around the kitchen and found the most crusty, revolting bread she could find and decided to mash it together and call it a sandwich.
Ok, you see, if we take this to school, the welfare people are going to start sending food baskets to our house to help us through the tough winter months.  I didn’t even look to see what was in the middle of these sandwiches—usually it’s peanut butter and jelly, but judging by appearances today, there is absolutely no telling what might be hiding between those crusty heels.  OMG, please tell me we didn’t have any sardines hiding in the pantry!
Anway, I’ma gonna buy my lunch today, and I’m pretty sure my sister is, too.  Yeah, thanks.