But also, I sometimes just like to traumatize my friends. 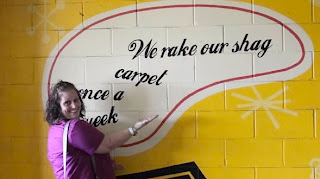 The pyromaniacs are out in force.  The neighbors are trying to burn down the house by launching flaming barrels of pyrotechnics into the sky, each launch beating the record set by previous launches.   I find myself continuously checking our home-owners’ insurance just in case our house spontaneously bursts into flames.  The kids can’t sleep, and in fact have been asking for the past 24 hours to blow things up.  The dog is doped up on doggie Xanax.  Yep, all signs that the 4th of July has arrived.

Aside from being tempted to dip into the dog’s Xanax supply myself, I feel like the holiday went surprisingly well.  There were no major injuries or burns, and the boys and I had a great time out at Mom’s local church picnic slash light-things-on-fire festival.
I was quickly reminded that 5-year-old boys can be friends with anyone.  They don’t have to have known you for long.  Jordan latched onto this one poor kid and stalked him mercilessly throughout the evening, declaring at random intervals, “You my friend” as he chased him through the grass and weeds and dirt and rocks and oh-ma-gawd-did-I-even-mention-how-dirty-my-kids-were-when-we-got-home?!
I also learned that those little glow-in-the-dark necklaces are handily converted into nighttime swords if you simply refrain from connecting them into a circle shape.  Boys like swords WAY better than little glowy necklaces, by the way.  Just sayin’.
I’m pretty sure I yelled something like, “Don’t pick up the flaming, glowing, fireball parachute!” like 500 gazillion times, yet every time a flaming fireball parachute was launched in our direction, whose kids ran to pick it up?  Oh yeah, mine.  Because, clearly my kids’ hands are impervious to flaming fireballs, and their super-powers will protect them from fire and sparks and all that crap, so who cares what Mom says, because, “Pfft, what does she know anyway?  Dude, that’s a PARACHUTE!”
So at around 10:30 last night, I carted two very sleepy, very DIRTY boys home in the car.  I think they made it about 30 seconds before they fell asleep, which made for quite a pleasant bedtime routine when we got home, if I do say so myself.  I took their shoes off, noticed that there was actually a layer of mud-ish dirt CAKED to the bottoms of their feet and in between their toes and quickly weighed the benefits of giving them a midnight bath versus the downside of the crying fit that would probably ensue.  And what did Mom of the Year do, you guys?  You guessed it.  I ever-so-gently scraped off as much of the dirt as I could, vowed to give them a double bath and wash their sheets today, and then I tucked their grumpy little butts into bed.
I then got Druggy McDoperson the dog out of his crate so that he could do his business, and amazingly enough, he was not even interested in the fact that the neighbors were still acting like terrorists and trying to fire bomb our house.  I totally need to ask my doctor for some doggie Xanax.  That is some gooood stuff!
The evil trolls of summer have taken over my house, and things are happening that are seriously making me consider moving into a hotel until the school year starts anew.  I have to warn you that what I am about to tell you is, in many ways, akin to a haunting or a possession, and I am starting to fear for those of us who live among these creatures.  Some of their antics are nothing short of terrifying, and these creatures are reckless in their abandon, seemingly unaware of the destruction left in their wake.  This post is meant as a warning to unsuspecting citizens of summer everywhere.
How to Spot the Trolls
Your house may have been invaded if you notice any of the following:
Dirty dishes left randomly throughout the house.  These creatures love to wallow in their own filth and will allow dishes to sit for days unattended and unwashed, simply watching food air-dry until it crinkles at the edges and snaps off the plates and bowls.
Piles of laundry placed in every room.  I have learned that apparently, as soon as the working members of the household leave for the day, the summertime trolls enjoy frolicking in smelly piles of laundry that they scatter throughout the house.  Serving as mini playgrounds of sorts, these piles of stench-collecting fabrics are attractive to the trolls, and they will fight to maintain this element of décor at all costs.
Scattered bits of dry ramen noodles.  I cannot emphasize enough that the trolls LOVE ramen.  They love beef-flavored, chicken-flavored, turd-flavored…any kind of ramen, and it has become clear that instead of putting it in a pan to cook, they must simply stand over the kitchen floor eating the crusty, dry noodles with their little pointy troll teeth, allowing the remnants to fall to the floor.  This can be the only explanation for the thorough covering of noodle crunchies found on my floor EVERY. SINGLE. DAY. of God’s creation during the summer months.
Soiled socks, hair ties, rubber bands for braces, juice boxes, Lunchable containers, straw papers, bookmarks, water guns, string cheese wrappers.  If you notice any of these things, you have been invaded!  The trolls vary in their likes and dislikes, but one thing is universal amongst them all.  They are relentless slobs.
What to Do
There is little you can do, but here are some tips to ease your suffering until the school year begins, as that is the time when you will likely be able to reign in much of the intolerable troll behavior: