So the boys are working on patterns in Kindergarten.  In case you can’t see it, the teacher’s note on the side says, “What happened?” 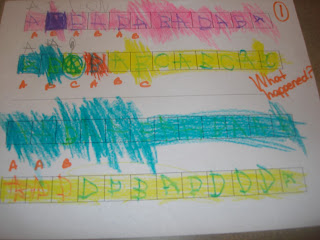 “We’re really sorry, Mrs. A., but we dropped him on his head at an early age, and he can’t do patterns…unless it’s on the ipad.  Then we’re good.”

“We’re not really sure what happened either, but if you figure it out, be sure to let us know.”

In lieu of using any of the above responses, when Jadon asked what I thought about his school work, I gave the very noncommittal response of, “Wow, Buddy!”  Because that really does say a lot, you know, without having to tell him that we’ve placed an emergency call to Hooked on Phonics and the Patterning Police.

So, after much deliberation, we just really don’t know what happened.  Also, we might be looking into Kindergarten remediation.

…because I learned a long time ago that it’s WAY better to laugh than to cry.  So we’ll laugh, little girl.

A Confession
They are going to want to know why I did it.  And the truth is, I’m not really sure.  I didn’t really start off planning to kill him, but things just got out of hand.  He was sitting there, looking all smug and cold—in his usual aloof way.  He’s always been like that.  Even when I’ve tried to reach out to him, to be his friend, he just shuns me, turns his head, like he’s better than everyone else.
I guess I just snapped.  I was in the moment, and I lost it.  It’s not like I went all nuts or anything.  I didn’t scream like a crazy person or start throwing things, although I have to admit, I did run a few scenarios through my head before I chose the method I finally went with.  Hey, a girl can daydream a little, right?
He’d been around long enough to know the drill.  It was time for him to pull his weight around here, yet all he wanted to do was hide away in the corner room with all the electronics, like he was too good to come out into the house with the rest of us.  And the few times he did come out, he would only socialize with one person—my mom.  And that started to get old, too.
It was always Mac and Mom.  Mom and Mac.  I mean, geez, there are other people in the house that need attention.  Some of us have homework to do and stories to tell, but oh no, those two were always hanging out together.  It was like they were in some sort of private club, and I’d had enough of it.  In the evenings, it was those two getting cozy in the big, poofy chair.  In the mornings, she would snuggle up with him to drink her coffee.  It was really starting to skeeve me out.
The day I killed him started off pretty much like any other day.  Maybe I was a little more tense than usual, but it’s not like I normally go around doing things like this either.  I think in my head I only wanted to hurt him at first, but then each time I went over the plan, it got more and more detailed, and I added things.  It was getting pretty intense, and it was going way beyond just messing around or pulling a prank.  I was really going to do it.  I was really going to get rid of him!
I don’t think it took me that long to decide to do it.  I think the thought was always there.  From the minute he waltzed into our house with his smug, better-than-you looks and his big-city style, I knew we wouldn’t get along.  He was always so efficient—even when he was playing or just kicking back and having fun.  Everything had to be oh-so-perfect and tied up neatly with a little bow.
He hardly ever made a peep, so it’s not that I didn’t like what he had to say or even how he said it.  He was just annoying.  I don’t know how to explain it.  It’s not whathe said—it’s just how he was.  He was new and different and just not my style.
So he had to go.  I gave him a month or so, and I didn’t like him.  Not one little bit.
I thought about throwing him in front of a car, but that seemed too brutal.  It just wasn’t me.   I’m more subtle than that.
I thought about tossing him out with the garbage on Monday morning, but I figured someone might notice him missing and run to his rescue before he even got carted away.  That would be just my luck.  Then, Mom and her precious Mac would be back together, and I would be in huge trouble for nothing.  No way was I going to go that route.
I considered running over him with the car, but I don’t drive, so that was pretty much out from the beginning.  I could have set up an elaborate stage and placed him beneath the tires of Mom’s car, forcing her to take the life of her own precious Mac, but that seemed too cruel even to me.
So I went with drowning.  Yes, it seems harsh, but it had to be done.  He simply couldn’t stay.  All that remained was to figure out the details.  I wanted to drown him in soda, but that would have looked too deliberate, too much like I wanted it to happen, like I wanted him covered in sticky goo, unable to function, unable to fight his way to the surface.  No, it had to be water.  Water always looks like an accident.
I dramatically enacted the oops-so-sorry-you-are-drowning routine the instant I saw Mac begin to flounder under the water.  He only gurgled for a few seconds before he gave in.  It was painless, really.  It was the best way.
My mom seems a little traumatized, but she’ll be fine.  She has her family and her friends, and she’ll be able to lean on Dell.  He’s always been a good friend, and he’s kept her secrets well.  Sure, he’s heavy and a little plump, but like they say, it’s what’s on the inside that counts, right?  And right now, Dell has a whole lot more going on inside than Mac does.  After all, Mac just has a whole lot of sludge and goo on the inside, and he’s sort of become a slow thinker.  I’d go with Dell any day, Mom.

This is why I’m planning to lock my daughter up.  She should not look this grown up. 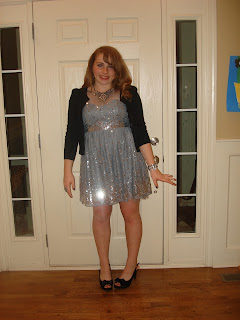 When I was younger, my parents seemed to have their own ways to totally mess with my head.  Thus, the crazy, purple-haired, tattooed mess that stands before you (or types at the keyboard) today.  It’s not a mid-life crisis, people.  It is the total and complete mind-fuckery that my family (my parents, specifically) put me through.  I am sure of this.  And now, a generation later, I am doing my part to totally and completely mess with my own children’s heads.  That is the kind of dedicated mother I am.
I can point to several things that have quite literally manifested themselves into my adult life that I’m pretty sure are directly related to incidents from my youth.  For example, Mom and Dad, do you know why I do not have a headboard on my bed?  Why I REFUSE to own a headboard?  Well, let me enlighten you to the fact that y’all had the noisiest, squeakiest, wall-banging-est headboard in the entire Midwest, and as a result, I was a traumatized pre-teen/teenager precisely once a week at 8:30 p.m., but not during the times when Dallas was airing on t.v., because that would have been unspeakable.  So, yeah, no headboard for me.  Because I am not doing that to my kids.  They may learn choice 4-letter words, but they will not be subjected to that.
Also, I’m pretty sure that fly swatters are for mashing flying insects—not for smacking children on their little behinds.  I am just now calculating the amount of bug guts I must have had smacked onto my ass, and I’m thinking it’s probably a miracle I didn’t come down with some form of airborne death virus, considering the number of times I was chased through the house with this device.  As a modern parent, I would much rather place my children in a chair or a dusty corner of the house somewhere so that they can think through their transgressions and plot their revenge against me for taking away their favorite electronic gadget.
And what was up with the trusting-me-with-boys-because-they-were-good-boys-from-church thing?  OMG, people!  They were not the good boys from church.  Those were the most repressed boys on the face of the planet, and every time there was a meeting that ran over at the church, guess what we were outside in the parking lot doing?  Yeah, it wasn’t memorizing Bible verses.  So none of that trust-is-good stuff  around here, because I know what those kids are really up to.  I was one of those kids.  There will be modern forms of mental torture in this area, as well.  There will be applications to fill out, contracts to sign, and repercussions.  I am locking up the teenaged girls.  Now, there’s how to properly mess with their little heads.
I was told I could never go anywhere without clean underwear.  Malarkey.  Kids, if your house is on fire, go.  Just go.  You can worry about the underwear later.
I was told tattoos would send me to hell.  Mind-fuckery, kids.  It’s really talking through Grey’s Anatomy that will send you to hell, and don’t let anyone tell you any differently.
I was told to always respect my elders.  (Yeah, until they start to go batshit crazy on your ass.  Then you find them a comfortable home, deliver them some cookies every now and then, and get a puppy to keep you company.)
And so it goes.  They had their ways.  We have ours.  Kids, stay strong.  And when I go crazy, please, put me in a home that has air-conditioning and re-runs of Grey’s, k?