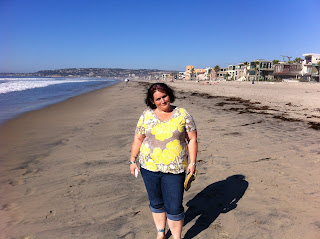 In the above picture, the only thing I’ve been lifting is maybe a box of Ding Dongs and a package of Oreos, neither of which helped me do anything except maybe add to my bulging butt or the hidden BINGO flaps on the undersides of my arms.  Not cool. 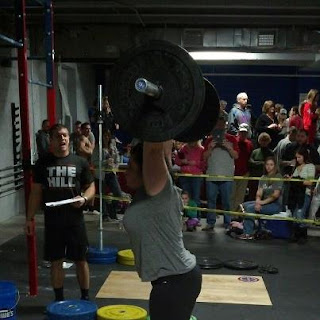 In this second photo, I am in the middle of a lift during my very first CrossFit competition.  Coach Carl convinced me I was ready for this as well.  (He’s very persuasive.)  Although I almost vomited and I thought I might die right in the middle of Round 3, I completed the WOD, and it was one of the coolest things ever!  There will be more of these.  There is still work to be done, but I’d rather be lifting weights than Oreos any ol’ day.
Five-year-olds are entirely too smart.  That’s all there is to it.  And here’s how I came to this amazing revelation.
Sometimes, after bedtime, mommies and daddies like to have a little alone time.  This becomes increasingly difficult as you add children to your household.  (Trust me on this one.)
For example, 5 gazillion children = .23413 second of alone time per day.  This is a scientific fact—don’t try to disprove it.  It is true.
Given the above-mentioned figure, it stands to reason that desperate adults might come up with stories—little white lies, if you will—about why they need the kids to go to bed, stay in bed, and leave them alone.  Fairly harmless really.
And so it went.  Last night, after tucking in the kids and promising them a few minutes of precious TV time in their room, we let them know that Mommy and Daddy needed to finish “folding laundry.”  Then we would be right along to tuck them in.  This was code for, “Stay where you are kids—this could scar you for life.”
Did they listen?  Well, partially.  But we are talking about 5-year-olds.
As we were “folding laundry” in the dark, a startling knock came at the bedroom door.  In a spectacular feat of gymnastic speed and flexibility, the (ahem) laundry participants dove for the floor, but alas, the door held firm.  (Thank goodness!)
Instead, we heard a little voice at the door.  “I know you aren’t folding clothes.  I can see that the light is off!”
Fabulous.  “Why, yes, yes it is.  Light burned out!”  God, we are terrible liars.
“Did you forget I want to sleep on your floor?”  Jadon was persistent, and his brother wasn’t far behind him.
“Nope.  Just a minute.”  How could we possibly forget?!  We knew we were missing the Dream Light and the Light Saber nightlight to make our room feel cozy.
And then came the finale.  “Okay.  Sorry to bother you.”  And he left.  And we burst into laughter, laughter than can only be understood by parents with little ones running amok throughout the halls.
Apparently, we need to come up with a list of more believable activities in which to participate in the dark.  The 5-year-olds are not fooled.
Some of you may recognize this theme from an earlier post of mine (http://www.cheeriosinmybra.net/2011/10/top-5-signs-your-kid-might-be-asshole.html) in which I outlined how you might be able to ascertain whether or not your kid might be an asshole.  Well, welcome to Part Deux.
Your kid might STILL be an asshole if you recognize any of the following traits or behaviors:
If you notice any of the above-mentioned symptoms, you might want to consider the following:
Also, as my daughter was in outright tears the other day, she did mention that she has one true-blue friend on her team that would never be mean.  So, thank you D for being who you are and for being a friend.  And thank you D’s mom for raising such a nice person.
Also, happy new year.